Welcome to the Insurance Capital of the World! Hartford, Connecticut is not only the state capital but also the fourth largest city in the state. Hartford is the main city of the Greater Hartford metropolitan area, and has a population of over 100,000. it’s also one of the oldest cities in the United States, this means the city is filled with rich history for any visitor to enjoy.

The city houses many of the country’s oldest buildings, some of which include the oldest art museum’s. the oldest park is also located in Hartford, making it an excellent location for anyone visiting.

Hartford was also where Mark Twain would raise his family, he would remark about how he found the town to be beautiful. For a while, Hartford was one of the richest cities in the United States, many of its riches coming after the American Civil War. This was because Hartford was the home of one of America’s most famous arms makers, Colt’s Arm Manufacturing Company.

Hartford is now in a strange situation, while the Greater Hartford Area is one of the richest in the country, most of its population lives below the poverty line. Though you’ll find this is true of most major cities. Despite this, Hartford is filled with vibrant culture for any visitor to enjoy. Greater Hartford‘s is also filled with both high ranking universities and manufacturing companies, however Hartford is most known for its top tier insurance companies.

During colonial times Hartford operated as a trading center for both the Dutch and the English. For a while, Hartford would be sold around until 1636 where Hartford’s boundaries would be officially set. Then new docks were built, helping explode the trade market within the city.

Hartford would also have a prominent role during the industrial revolution. The city would begin to specialize in manufacturing precision parts used in automobiles, clocks, and even rifles. Colt’s Arm Manufacturing Company was stationed in Hartford Connecticut. Hartford was also known for its innovation, with many modern pieces of technology coming from that time. Some of these include rotator cuffs for machinery, gear transmission for vehicles, and even chucks that are used for drills.

In the early to mid 1900’s Hartford was hit by a flood and then a massive fire that killed over a hundred people. Then after World War II, a number of Puerto Ricans moved to Hartford, this drove a lot of its original residence to outer suburbs. This led to a decline in the main city, causing insurance companies to move their offices out.

Hartford would storm back into power following the establishment of the Hartford Graduate School. The city would then kick off a 4 decade long rebuilding process beginning with the reconstruction of the Cathedral of St. Joseph. Multiple colleges, and company buildings would be constructed, and many houses were turned into museums. Transit hubs were built and many skyscrapers began to pop up around the city, the most notable being City Place I. Connecticut’s insurance giants would move back in during this time, most famously the Phoenix Life Insurance Company. Most company’s would build their offices on Constitution Plaza.

It was seen as the ideal urban environment and was often used as an example for what urban growth should look like. a mixed urban plaza were both vehicles and pedestrians can co-exist safely, while still allowing access to the road should any resident want to take a taxi home. The plaza is surrounded by a number of mid-twentieth century buildings that were mostly designed by Charles Dubose. Such buildings include the 100 Constitution Plaza, 200 Constitution Plaza, and many more. Though most residents would agree that the Phoenix Life Insurance Company Building is the staple of the plaza. Constitution Plaza also features a freestanding pavilion used by Trinity College as part of their campus, and a U shaped court that was repurposed to luxury apartments by the company Spectra in 2015. The plaza itself is connected via well kept walkways and has numerous large pedestrian areas that include pools, fountains, and even a clock tower. Constitution Plaza is now home to many restaurants and shops, turning it into a retail hotspot for anyone visiting Hartford.

The Greater Hartford area is a name that is used to define a large boundary that covers both Hartford and even parts of New England. While Hartford is known for being home to insurance companies it has recently expanded its specialty. Recently Hartford is becoming one of the leading entities in the tech industry thanks to its location.

Connecticut ranks as the 3rd most educated state in the country, making it prime real-estate for both universities and tech companies. The Greater Hartford Area is home to many universities that specialize in many aspects. While mainly known for its medical universities, Hartford has recently expanded to other areas.

Hartford is now home to schools that specialize in areas such as tech, and manufacturing. Some of Hartford’s universities now specialize in healthcare. Some of these universities include UCONN, Trinity, and even St. Joseph’s. This has also made Hartford one of the best states for tech companies wanting to put to use the skills of graduates.

As of late, The Greater Hartford Area is becoming prominent in manufacturing and even aerospace. Some of these manufacturing companies include Reno Machine Co., Novo Metal Finishing Equipment, Hebert Engineering & Design and plenty more, including a couple of solar companies. While most manufacturing companies in Connecticut fabricate heavy machinery and metal framing, they also conduct plenty of precision manufacturing as well. Companies such as Synectic Product Development, focus on developing medical products for hospitals and clinics. Hartford’s expansion into tech and manufacturing has led to an explosion of vibrant urban culture in the city.

Hartford is now home to many different types of arts, whether that be music, writing or even performing arts. Hartford has many different genres of music for anyone to enjoy, from salsa, jazz, blues, indie, composer and even electric! The city also has plenty of shows for any visitor interested in Street Performances, acting, or even comedy shows! Hartford has a number of parades for anyone looking to vacation on a holiday. Some of which include, St. Patrick’s Day, Veterans Parade, and even a Puerto Rican Day Parade!

Hartford has many activities for any visitor. If you’re planning a vacation to Connecticut soon, it’s important to have good transportation there. Now a days most limo service’s will provide an hourly service for anyone looking to take a shopping trip.

Hartford is also packed with residents who work in the city, so you’ll often times find them taking a car service or taxi in order to avoid public transit. Most drivers in the city are very reliable, however if you want to be absolutely sure than you can also order a limo. Overall any visitor planning a visit to Connecticut should absolutely give Hartford a chance. 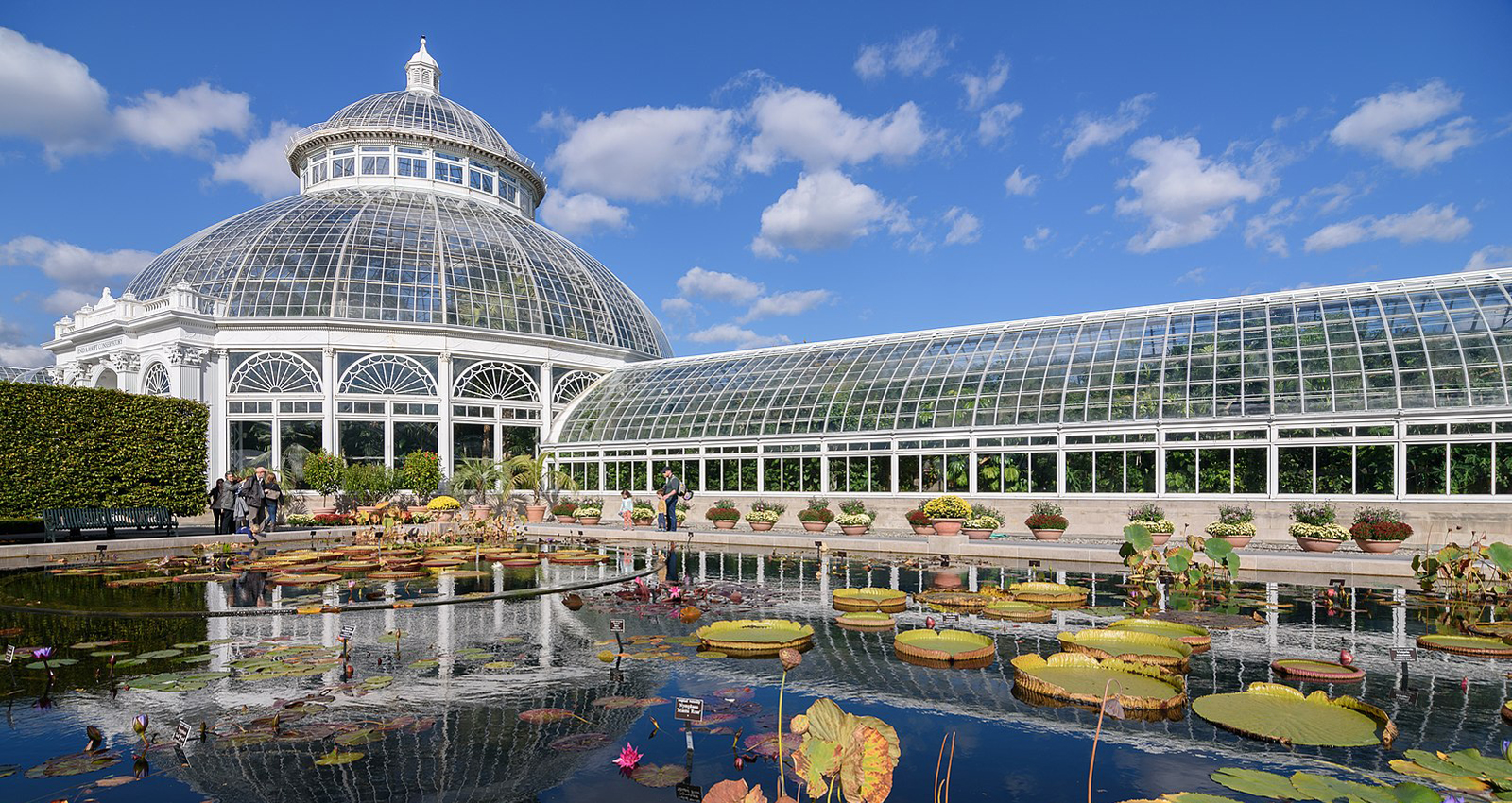 Welcome to the New York Botanical Garden! established in 1891, the Botanical Garden is an exhibition of all sorts of plants and flowers from around the world while simultaneously acting as a reserve to protect the very plant life inside of the Garden.

Inspired by a visiting botanist Nathaniel Lord Britton, him and his wife Elizabeth believed that New York should house a massive botanical garden in order to help the residents of New York better understand the nature around them and how valuable some plant species can be or how ancient some of the trees in the city are.

The 250 acre historical landmark is now the largest botanical garden in the United States. housing 50 specialty gardens it holds more than 1 million plants. Victorian style glass houses, Native plant gardens that house some of the most diverse plants located Northeast of North America, and one of the worlds most sustainable rose garden are among the many different types of exhibits available to any visitor coming to the Botanical Garden.